A long gruesome video seared mobile phones across the country last June, briefly stirring the conscience of an otherwise benumbed nation. It showed a young man in Jharkhand, tied to a pole, screaming piteously as villagers took turns to beat him with sticks.

Two months after his lynching, I joined a team from Karwan e Mohabbat — a solidarity group committed to fighting rising hate — to visit the young man’s family in Seraikelan-Kharsawan, share their grief, and express our shame. The story that emerged lays bare the many fault-lines in our land, some old, some new, its cruelties, and the way it mercilessly crushes hope and possibilities for its most vulnerable people.

In the video, when the mob asks the boy his name, he first replies, “Sonu”. When they beat him more, he says he is Tabrez Ansari. “A Muslim,” someone says, beating him more. The crowd forces him to recite Jai Shri Ram and Jai Hanuman. Even this recitation does not eventually save his life.

Tabrez lost both parents at a very young age. He was raised by his uncles, who pulled him out of school and sent him to apprentice in a garage one of them owned. He was 15, and he trained to be a welder. At 16, he set out to find his place in the world. He travelled to Pune, where he did many odd jobs, finding regular work eventually in garages. He would return home every Eid.

When he turned 22, he decided he must marry to fill the loneliness of his life. His uncles found an 18-year-old girl, Shahista, in one of the poorest homes in the neighbourhood. Her father was drunk most of the time; her mother toiled tirelessly to bring some money home. She had educated her daughter till Class 10. She thought marriage was a way for her daughter to escape her drunken father and otherwise hopeless destitution. Tabrez’s uncles said the boy was an orphan and would seek no dowry.

The family showed us pictures of the wedding on their mobile phone. The girl’s mother had borrowed money for the festivities. Tabrez is glowing with happiness in his dapper black-buttoned coat. There is a rose-bud pinned to his lapel.

After their marriage, he resolved to take his bride to Pune, but first wanted to hire a room and set it up for her. The morning after he was lynched, he would have left with Shahista for Pune. Their train tickets were booked, their suitcases packed. Two months later, when we met his mother-in-law she wept that his suitcase still stood packed. They had not had the heart to unpack it.

It was midsummer, on June 18, 2019. Since he was to leave the next morning with his wife to Pune, Tabrez had gone to seek the blessings of his father’s sister. For this, he had taken a lift from two friends who were travelling in the same direction. The three sat on the same motorcycle.

It was late evening when they were returning home. He had called Shahista, assuring her he should be home in half an hour. But he never came back. When she called his phone, there was no answer. Despite their mounting panic, the family had no option but to wait. Around 6:00 in the morning, Tabrez finally called, weeping. He said he had been trapped by a crowd at a village 6 km away, Dhatkidih, and he begged them to come to his rescue.

Shahista and her mother rushed to the home of Tabrez’s uncle, a maulana. The three hurried to the village. There they saw Tabrez still tied to a pole, almost unconscious, his head and body bloodied. They learnt later that when the crowd had accosted the three as they were returning the previous night, his two friends had escaped on the motorcycle, leaving Tabrez to the crowd. Those two have still not returned home, probably scared that they too will meet the same fate as Tabrez.

Tabrez’s uncle, wife and mother-in-law were too frightened to confront the still frenzied crowd and rescue him. They returned home, desperately trying to round up a crowd to go back with them. But by 8 a.m., word came that Tabrez had been taken to the police station.

The three then rushed there, but the constable blocked their entry. The women wept and begged, and he finally took them to Tabrez, whom they found stretched on a mat on the floor of the police lockup. His head was bandaged, and his clothes and body bloodied. They managed to take a picture of him. They learnt later that his skull and many bones had been fractured.

But the police took him to a local health facility, where doctors only bandaged his head.

Tabrez was obviously in unbearable pain. He pleaded for water which the police refused. His uncle, the maulana, pleaded to be allowed to take the boy to hospital, and promised that they would return him to the police after he had been treated. The police refused, saying that if the family had so much sympathy for a thief, they could join him in the lockup. The only concession they finally allowed was to permit them to buy him bottled water and biscuits.

When they returned the next morning, they learnt that Tabrez had been shifted to jail again. There, they saw him for 10 minutes through a glass screen, and spoke to him over an intercom. He wept, asking them to get him out at all costs. His mother-in-law said she could not bear his cries for help, and put down the receiver. This was the last they would see him alive. 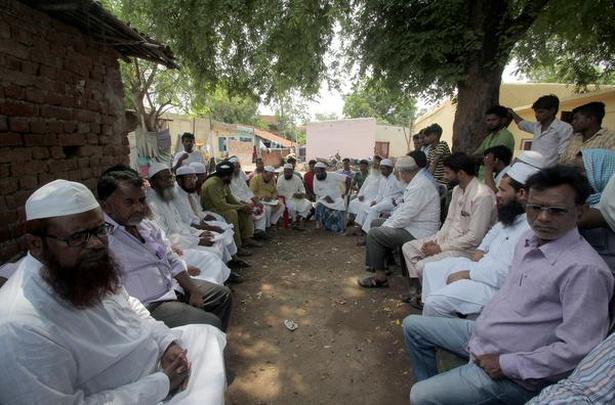 The family, although very poor, pooled all it could to hire a lawyer. He told them he would “study the case”. But two days later, Tabrez had died in custody.

The police registered a complaint against the lynch mob only after his death. But they did file a FIR against Tabrez the morning after his lynching. There were no complaints of theft in the village, so they wrote in the charge-sheet that he “intended to steal”. The police tried to cover their tracks with the obvious falsehood that Tabrez was perfectly well in jail, and then suddenly died of poisoning and, later, a heart attack.

In reality, the boy was killed not just by the lynch mob but also by the police the police. If the police had sent him to hospital instead of to jail, he might have been alive today. The doctors and magistrate, who saw him nearly dead and still approved that he be sent to jail, and the jail staff, they all share the guilt of his cruel death.

There is a great evil stalking our land. Two young people, whom the state did nothing to protect or nurture as they grew up with their many denials — had still gathered hope and were about to build a new life. Their lives were crushed by the inexplicable hate of a lynch mob that thrashed a man for six straight hours; a mob that no villager tried to restrain. By a police force that broke the law. And by judges and doctors who reneged on their fundamental duties. What have we become as a people? Or were we always this way?